One of the hot topics of this years’ Transport Research Arena 2016 in Warsaw has been automation in transport. According to European Commissioner Violeta Bulc, it is especially due to the expected safety benefits “why autonomous driving is so high on the agenda”. Even though mainly focusing on road and rail transportation, MUNIN got a chance to represent the maritime view on this topic. On Monday, Thomas Porathe from NTNU/Chalmers put the MUNIN results in context with other ongoing European research projects within his scientific presentation about “A navigating navigator onboard or a monitoring operator ashore?”.

On Tuesday, Hans-Christoph Burmeister from Fraunhofer CML discussed then with the Director of the European Commissions’ DG Research and Innovation Ms. Clara De la Torre as well as further experts from rail and road research about “Human Factors, Safety and Acceptability in Automation”, how autonomous systems in all transport modes can become the future and how the interaction between the user and autonomous systems must be taken into account in current research. 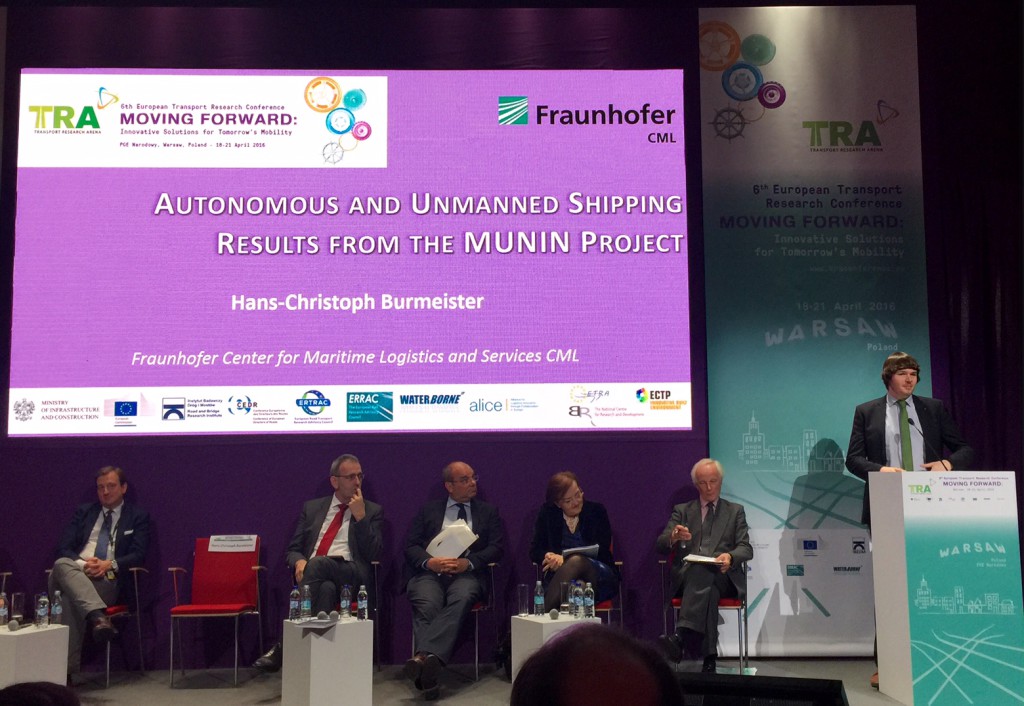 Rolls-Royce presents a vision of a future land-based control centre in which a small crew of 7 to 14 people monitor and control a fleet of remote controlled and autonomous vessels across the world. The crew uses interactive smart screens, voice recognition systems, holograms and surveillance drones to monitor what is happening both on board and around the ship.

After three years of concentrated research work in developing and investigating a viable concept for an unmanned and autonomous merchant vessel, the MUNIN project has come to an end. The consortium partners covered all aspects relevant to the issue, such as autonomous navigation, engine and propulsion automation, communications and shore connectivity, system redundancy and efficiency as well as questions related to regulations and liability. The main focus was to create and validate a concept which is technically safe and sound on the one hand but also is economically competitive and ecologically compatible on the other.

A concept has been drafted, system prototypes have been developed, a simulation test-bed has been established and a feasibility study was produced. And most importantly, further research needs have been identified.

MUNIN’s final brochure consolidates the project’s findings from all research areas and provides direct contact details for further in-depth inquires. The document can be downloaded in the dissemination section of the MUNIN webpage.