Consequently, autonomy is also seen as a possibility for maritime transport to meet today’s and tomorrow’s competitiveness, safety and sustainability challenges.

According to Waterborne TP an autonomous ship is described as:

Next generation modular control systems and communications technology will enable wireless monitoring and control functions both on and off board. These will include advanced decision support systems to provide a capability to operate ships remotely under semi or fully autonomous control.

This description implies two generic alternatives that are combined in an autonomous ship (see also figure below): 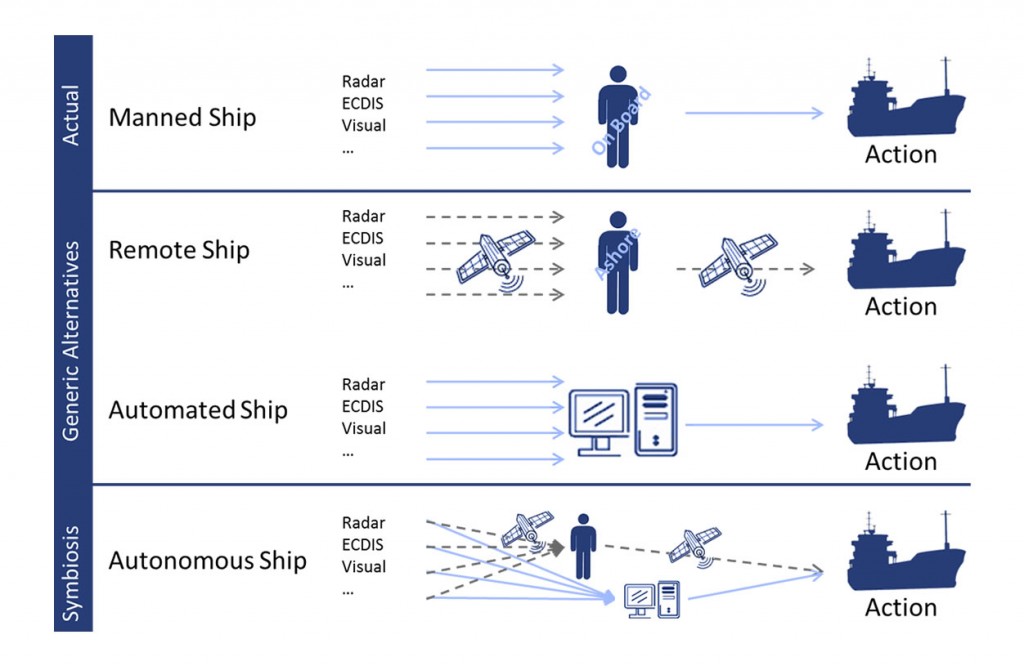 The Autonomous Ship, as it is understood in the MUNIN project, is a symbiosis of the Remote Ship and the Automatic Ship – © MUNIN

Within MUNIN’s idea of an autonomous and unmanned vessel both generic alternatives will be combined in a holistic concept. Developing and validating a suitable mixture of remote and automated technology for ships will be the core task of the MUNIN project. The onboard decision system approach that is implemented in MUNIN may be illustrated as in the figure below.

MUNIN would normally rely on automatic and fully deterministic control functions to run the ship. However, various sensor systems will be needed to detect problematic situations such as unexpected objects in the sea, dangerous weather conditions or danger of collision. If an unexpected situation occurs, an autonomous control module will be invoked trying to remedy the situation within its given constraints. If the system cannot achieve this, it will request support from a remote operator or start a fail-to-safe procedure if the operator is not available. Properly implemented, this type of autonomy will reduce the need for human supervision while maintaining a high and well defined level of safety. However, a major challenge will be to device sensor systems so that all relevant dangerous situations are reliably detected and appropriately acted upon.

Back to About MUNIN