The MUNIN project developed a technical concept for the operation of an unmanned merchant vessel and assesses its technical, economic and legal feasibility. Besides the projects intention of developing a concept that is completely unmanned at least for parts of the voyage, short-term exploitation potentials of the technological progress for manned shipping is also under investigation. Thereby, MUNIN is the abbreviation for Maritime Unmanned Navigation through Intelligence in Networks, pointing to the project’s inherent idea of developing technology for an unmanned autonomous vessel, but it is in Norse mythology also the name of one of Odin’s ravens that each day flew around the world without guidance, gathering information and in the evening safely returning the information – its “cargo” – to its master, the Norse god Odin. Thus, the autonomous ship shall figuratively act like the raven Munin: Independently and safely bringing its cargo to the destination.

The origin of MUNIN lies in the strategic research agenda and an implementation plan of Waterborne TP, a cluster of European maritime stakeholders that has published a vision paper for the future development of the maritime industry regarding competitiveness and innovation while also considering safety and environmental requirements. As one key exploitation outcome for the maritime European research agenda it names the Autonomous vessel, which is equipped with modular control systems and communication technology to enable wireless monitoring and control, including advanced decision support systems and the capabilities for remote and autonomous operation. 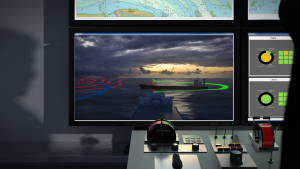 The use case investigated in MUNIN is a dry bulk carrier operated in intercontinental trade. This type of trade bears a high attractiveness for the MUNIN concept, as additional cargo requirements are low, the attractiveness for slow steaming is high and dry bulk carriers normally transport cargo from point to point resulting in a long, uninterrupted deep-sea voyage compared to e.g. container vessels. This is an important characteristic, as MUNIN only envisages autonomous operation of an unmanned vessel during deep-sea-voyage, but not in congested waters or during the approach. Those tasks will still be executed by a crew on board, though the deep-sea/voyage-length ratio is an important economic factor for the operational efficiency.

Restricted satellite bandwidth in certain regions and high communication costs make a simple remote control solution unattractive. Thus, MUNIN propose a concept, where the ship is autonomously operated by new systems on board the vessel, but the monitoring and controlling functionalities are executed by an operator ashore in the Shore Control Centre. Therefore, the MUNIN concept defines the following systems and entities: 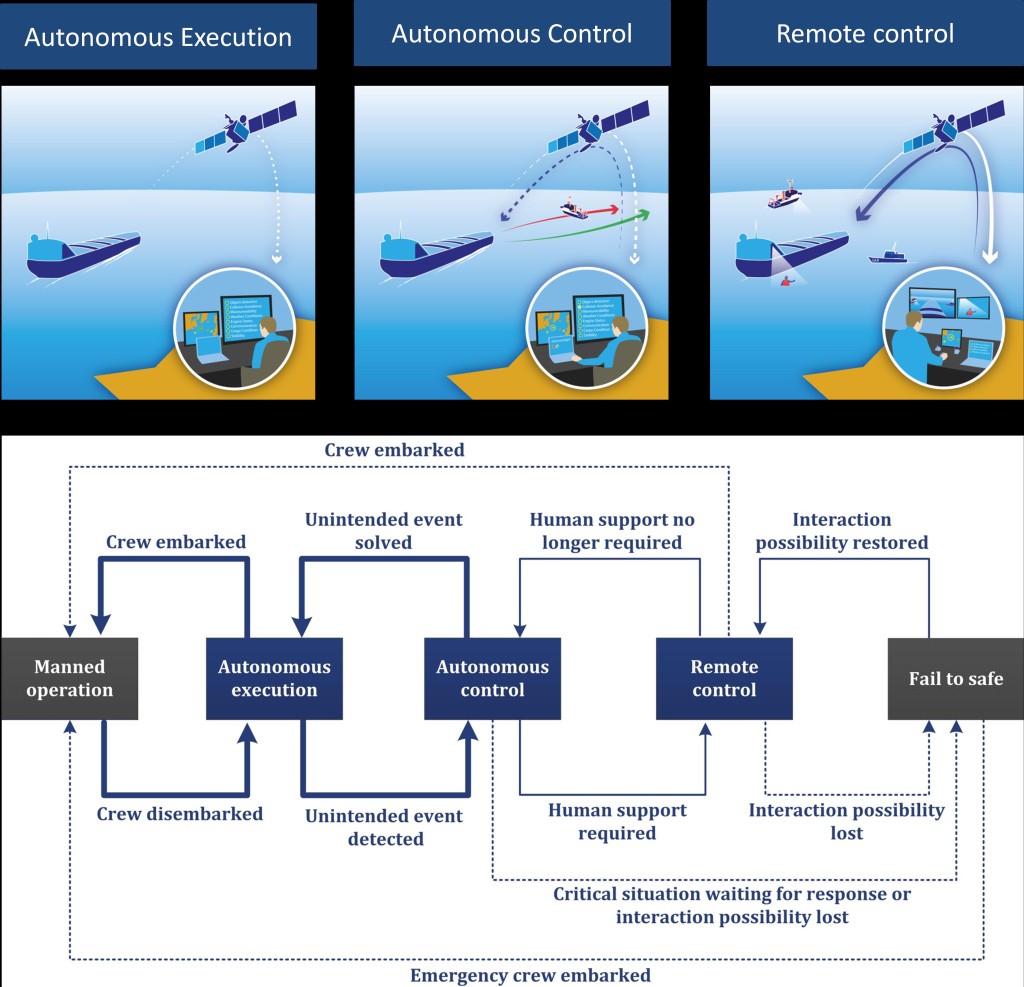 Based on a shipping cash-flow model a financial analysis of the developed concept for a new build MUNIN bulker was conducted. It showed that compared to a conventional manned bulker the autonomous bulker would be commercially viable under certain circumstances. In a base scenario the MUNIN bulker is found to improve the expected present value by mUSD 7 over a 25-year period compared to the reference bulker. Besides cost savings due to a higher efficiency of land based services in port and the Shore Control Centre particularly the fact that the autonomous ship makes changes in ship design possible ensures a positive expected present value. Such new innovative autonomous ship designs should make a reduction of fuel consumption (and emissions) possible. However, this is assuming that the depicted challenge of autonomous heavy fuel oil operation could be solved. But even if that event does not occur, unmanned vessels also bears efficiency potentials for certain niches, like e.g. short sea shipping in emission control areas. While still associated with a high level of uncertainty – due to the early stage of concept development and the limited scope of the project MUNIN – the results indicate that autonomous ships carry the potential to increase the profitability of shipping companies.

Besides profitability, safety is of course levering the implementation of unmanned vessels. The incident categories collision and foundering were responsible for almost 50% of all total losses in the period 2005 to 2014. Thus it clearly represents the category with the highest incident probability. Furthermore, human errors are a crucial part of the root cause of most maritime accidents. Based on an analysis of collision and foundering scenarios for an unmanned MUNIN vessel and given a proper operational and robustness testing, a decrease of collision and foundering risk by around ten times compared to manned shipping was found to be possible, mainly due to the elimination of fatigue issues. Also, risks from engine and other system breakdown should be lower for unmanned ships if proper redundancy is implemented and improved maintenance and monitoring schemes are followed. Fire and explosion represents a relatively small part of all incidents and with the possibility to use more efficient extinguishing systems in fully enclosed spaces, it is likely that the unmanned ship will be much less risk prone than the manned ship. Finally, risks from cyber-attacks and pirates are issues that cause concern. However, as it should be possible to design ships and systems that have a very high resilience against such attacks and one could assume that unmanned ships are less vulnerable to attacks than manned ships in this context as well.

Provided there is reasonable certainty that the unmanned ship can operate at least as safely as a manned ship, in all its functionalities, there is no reason to think that the legal framework cannot be adapted to enable a deployment of autonomous vessels in maritime transport. The principal areas of concern are navigation and manning (the ship master, and SCC crewing): in both cases, the unmanned ship will significantly alter the practical state of play, with likely legal consequences. Standards in construction, design and equipment of ships will also be concerned. However, overall it can be concluded that the unmanned ship does not pose an unsurmountable substantial obstacle in legal terms. None the less, there will be a high number of issues to resolve, particularly relating to the literal application of relevant law, for example where specific human input or standards are required by applicable conventions (the most obvious example concerns the ‘human’ look out requirement in the Collision Regulations). In terms of liability, the biggest issue will concern the attribution of the existing ship master duties to the relevant and adequate persons involved in the operation of an unmanned ship. It is unclear whether this legal role should be divided between the SCC operators and masters, or attributed to a single entity in the SCC. Here further research will be necessary.

Thus, unmanned vessels can contribute to the aim of a more sustainable maritime transport industry. Especially in Europe, shipping companies have to deal with a demographic change within a highly competitive industry, while at the same time the rising ecological awareness exerts additional pressure on them. The autonomous ship represents a long-term, but comprehensive solution to meet these challenges, as it bears the potential to:

This shift of nautical and engineering tasks from ship to shore also opens new professional perspectives for mariners that can now remain connected to family, friends and their social life. This can help to attract new, highly qualified professionals for “shore-based seafaring”. Indirectly, this can also further promote sustainable maritime transport.